A spray-painted facade is the perfect new business card, within a few days.

The facadeof a building is much more than just a functional shell that provides protection. See the Lammer Fruchtlogistik GmbH: Its commercial hall dictates the company's image and shapesits environment. The goal were flawless facades. Using the all-in-one spray paint Ratiospray 2170 by Brillux, painting contractor Peter Wiener made them presentable again.

Over the years weather, dirt and scratches had all left their marks on the commercial hall of Lammer Fruchtlogistik GmbH, a specialist for the storage of fruit and vegetables. A renovation was in order. On top of that the building was expanded, and the old and new building parts had to be color-matched.

Therefore the company contacted Peter Wiener. The painting contractor and Lammer CEO Heimo Lammer have worked hand in hand for years. "A business relationship that works. The coating of the commercial hall is just one of many painting jobs we've realized", says Wiener.

Wiener turned to Benjamin Quelle, Brillux sales representative in Graz, in search of a suitable product for the hall's coil coating panels. "After the creation of a sample area and a scratch test it become apparent that the Ratiospray 2170 is the perfect product for this project", says Quelle. The effortless application on large surfaces were another major argument.

Lammer Fruchtlogistik's desired color shades for the surface, roughly 1,000 square meters wide, were anthracite and gray beige. Painting contractor Wiener went over the surface using an hydraulic ramp – due to the size of the facade there was simply no other way to produce a homogeneous surface. Despite having to cross soft and uneven ground at times, he was able to coat all areas of the facade quick and smoothly using the airless spray system.

Within a few days Wiener was finished renovating Lammer Fruchtlogistik's commercial hall. Thanks to its high-value acrylic resin base and lightfast pigments Ratiospray 2170 retains its original color shade for a long time after being applied to the commercial hall's facade. 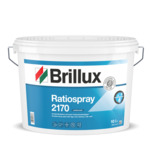