This article appeared in colore #GraphiteGray

Order the print version at: kontakt@brillux.de

It came about long ago, over 300 million years. Today, we call this the Carboniferous period. Giant primeval forests rotted down or as scientists call it, carbonized. Later, carbon went on to become the sixth element of our periodic table and, when it is pure, it has two beautiful daughters; diamond and graphite. Here is the story.

Diamonds are one of the most valuable goods in the world. At 10 on the hardness scale, they are considered indestructible, since they have been exposed to unbelievable pressure. They adorn the crowns of Kings and Emperors as cut gemstones and the necklaces of stars and celebrities. Because of diamonds, there has been love and murder, robberies and trades on diamond exchanges. In the hands of brutal potentates, they were considered blood diamonds.

A story full of events and emotions, saturated with blood and tears. From Marie Antoinette’s diamond tiara to the politically controversial Koh-i-Nor mined by Britain, diamonds have written history like no other stone.

Next to its illustrious sister, graphite was rather something of a shy sibling, an inconspicuous unknown, the anonymous allotrope (allotropic refers to two forms of appearance of the same element – in this case the element carbon has the atomic number 6, but this is only of interest to chemists and mineralogists). Graphite owes its inconspicuous history to its low price and frequent occurrence. By contrast, a ton currently costs 1800 dollars, whereas the most famous diamond in the world, the Koh-i-Nor in the British Queen's crown treasure, is estimated at 400 million euros with 105.6 carats.

Around 1,300,000 tonnes of graphite are dug each year, both above and below ground. This is particularly intense in China and India, Madagascar and Zimbabwe, but also closer by, for example in Passau and Styria. The fact that Austria was the second largest conveyor in the world up to the 1960s and is now only a graphite dwarf is one of the lunacies in graphite’s history, of which there are many. In 1789, a year of revolution, the German mineralogist Abraham Gottlob Werner gave the material its name, derived from the Greek term "graphein" for letters, because graphite has been valued as a writing and drawing material since ancient times in Europe.

This means that we don't actually have lead in our familiar pencils, either – otherwise every chew on a pencil would be terrible for the person’s health – instead, it is humble graphite. England imposed an export ban on these pencils in the Napoleon Wars, as the material was and is also very suitable for the refining of projectiles.

Unlike its beautiful sister, graphite is a true hero of everyday life. The sixth element is not only an essential for every artist, it is a sought-after lubricant and is indispensable in the production of brake linings. Here, graphite has replaced hazardous asbestos and as it is just as popular as an insulating material, it is also used in the production of electric steel and electrodes. Its versatility is its strength, its benefit is its value. By the way: Since the spelling style, we have also been able to write graphite with f. 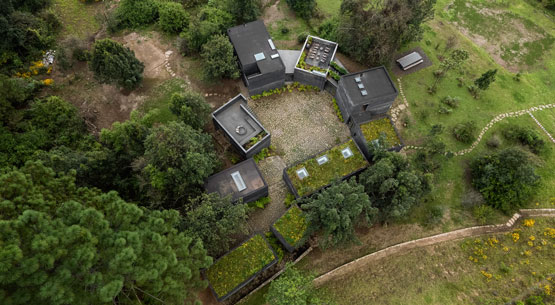 Like dark shadows, nine concrete cubes rise up from a forest near Mexico City. Casa Bruma: a project by architects Canales and Rodriguez.