This article appeared in MarktImpulse 3/20

Order the print version at: kontakt@brillux.de

With the future of the traditional company Theodor Schulz in doubt, industrial engineer Harald Alps decided to temporarily take over. And found his calling. These days, he's is still on board and very much a part of the team.

In spring 2009, Harald Alps was working as a statistics lecturer at Lüneburg University of Applied Sciences. The then 36-year-old wrote about the dynamics of corporate networks in his thesis. Although Alps had already gained practical experience in the industry, as a businessman and engineer, it seemed clear that that point that he would focus more scientifically on companies in his profession in the future. However, when he was finally allowed to officially declare himself qualified with a PhD two years later, Alps no longer dealt with the theoretical aspects of corporate networks. Even while he was still dealing with the theory, the lecturer was plunged into practical matters and, as Managing Director, is now responsible for a business himself: The Theodor Schulz painting contractors in Lüneburg.

I saw it as my task to further expand this historic business.

Today Harald Alps sits in the self-designed, bright, spacious office space on the gallery floor of a two-story white-gray new building on the edge of the northern German Hanseatic City of Lüneburg. The company moved to the new 410-square-meter company building in 2015. This is the company’s third headquarters already, and the painting contractors was founded less than six kilometers from the current location. 157 years ago, painter Heinrich Schulz opened his store in the narrow, cobbled Katzenstrasse, which is now a pedestrian zone. Later, the company was named after his son. When Schulz's successor, who was due to take over operations, died in the First World War, an colleague took over. 157 years later, after two world wars and many changes – including in the painter's profession – the company Theodor Schulz, which started in the middle of the historic Lüneburg old town, still exists.

The company's many years of history and the amount of energy and life services that went into Theodor Schulz GmbH & Co. KG were the main reasons that convinced Harald Alps to take over operations temporarily in 2009. When then boss Horst-Friedrich Zielasko suddenly passed away, Alps’ wife Sylvia, a certified optometry professional and relative of Zielasko’s, inherited the company.

But Sylvia Alps, who runs her own eye optics store in Blockde, was busy working as a lecturer in optometry at this time. The future of the painting company was initially unclear: "There were many jobs at risk and there were major concerns regarding how to proceed. But I was willing to provide direction. I thought it was my job not only to preserve this historic business, but also to expand it further and make it fit for the future," Alps says.

But what impact does it have on a business if the boss doesn't know the trade? In the case of Theodor Schulz GmbH, this question is easy to answer: It enriches. Harald Alps' personality has a lot to do with this. The 48-year-old, who seems younger, is not afraid to acknowledge that his 18 employees know a few things better than him. "Everyone has their core competencies here," Alps says. "And if I don't know something, then someone else from the team usually does."

Operations manager after a team decision

Due to his lack of experience in the painting trade, the interaction with his Operations Manager Benjamin Wagner is particularly important for Alps. The 30-year-old has been in charge of the company's operational business for four years. Wagner plans the construction sites, including the corresponding materials and personnel, calculates the orders and is the first point of contact for potential customers.

If I don't know something, then someone else from the team usually does.

When Alps suggested the position of Operations Manager to him, the father-of-three could not even imagine not driving to the construction sites anymore and being hands-on, he explains, himself the son of a master painter: "After all, I am a craftsman to my very core. But I said, if my colleagues want me to, I'll do it. " The team was behind the idea. Everyone benefits from Wagner's transition. "Here, we work very closely as a team on an equal footing. And we remain constructive, even if mistakes happen from time to time,” explains the 30-year-old, who was drawn by love from his home village on the Baltic Sea coast to Lüneburg, two hours away. "Understanding both sides allows me to piece many things together in the big picture and now I also know why some things can only be planned in the short term."

It is important to me that the employees find a home here and simply feel comfortable.

And even if things have to happen spontaneously and quickly, Wagner finds a solution. For example, if you can only see during an appointment on the construction site that the bridge railing is best painted from the boat and the corresponding safety clothing still needs to be procured... Within a few hours, the plant manager organized life jackets via an eBay advert and picked them up directly from the sales rep so that the team could finish the wooden railing (not only on time, but also safely) over the Ilmenau, a minor contributory river to the Elbe. Dividing tasks between Alps, an engineer and salesman with a theoretical background, who manages personnel and marketing, among other things, and the operations manager, who, as a former employee, knows day-to-day business inside and out, just works: "We complement each other well," Alps says. "This intertwines and gives us the opportunity to do the work much better by focusing on our strengths. This makes us very flexible."

The Lüneburg municipality is one of the company's main customers, which acquires its orders from the local area. As a result, the Theodor Schulz GmbH team had a great influence on the design and face of Lüneburg and, among other things, redesigned the police inspection station, the tax office and many of the schools. "We have roots and are recognized here," Alps says. "I already know some of the customers from my school days at Wilhelm-Raabe-Schule in Lüneburg or they are the children of former teachers." Managing Director Alps is particularly proud of the renovation of the historic building of his former school as well as the facade renovation of the colorfully painted sandstone portal of the historic Raths pharmacy. "This is one of the highlights I always like to pass by. It is really something special. "

I already know some of the customers from my school days ...

Ultimately, his ties to the location and his employees led Alps to decide to turn the temporary management of the company into a permanent solution. "It's a great team and I really enjoy working with them to shape the future," Alps comments. In his job, he appreciates the fact that he always learns new things. That keeps his work varied and interesting and as a father, he has plenty to tell his young daughter. "I'm actually one of those guys who loves to do everything for themselves, but I've learned to seek advice and trust my employees. And they also trust me when I initiate changes."

We work as a team on an equal footing. And we remain constructive, even if mistakes happen sometimes.

A mixed team instead of an old men's team

Such as making changes towards digitalization. Alp's first official steps were to design a website and introduce new company software. He has always had a great interest in technical innovations and this helps him with such extensive digital projects, says the 48-year-old. Processes such as time logging, costing and construction site planning are now predominantly digitalized. Employees log in online to their respective construction site on-site and can record their hours using their smartphone or tablet. This saves time and makes post-calculation easier for Operations Manager Wagner. A lot of communications have moved online during the coronavirus crisis. Now, the employees use Messenger to hold discussions and the three-person office team works from home.

This works smoothly since the team is already familiar with the technology from everyday personal life. Under Alps' leadership, the age structure has shifted from an average of 50 years, to between 20 and early 30s. When hiring new recruits, Alps places great importance on the mix being right, which is why Alps hired not only young people, but also people over the age of 50. "It is important to me that the employees find a home here and simply feel comfortable. People who can only work under pressure or under the supervision of the boss do not fit into our team. It takes years to form a team that fits your own philosophy."

This team, in line with one of Alps' business goals, is likely to gain a few more players over the next few years. He would also like to create a showroom for presentations and sales. This could then also be used to present ecological products. These are particularly important to the managing director, who would like to focus on sustainability in the future. The former statistics lecturer has not regretted his transition to more practical matters. "Sometimes you have to see something else. I've been lucky to see different worlds in my life and was thus able to bring many new perspectives to the company." After working as a scientist and industrial engineer, Harald Alps found his professional home in the managing role at Theodor Schulz.

It takes years to form a team that fits your own philosophy.

In 1863, master painter Heinrich Schulz founded his painting business in Lüneburg. His son Theodor Schulz took over the firm. After two world wars and the death of the heir, the company was passed on to the employees. In 2009, qualified businessman Harald Alps took over the management of the company, which has 18 employees. In addition to private contracts, one of the main customers is the city of Lüneburg. 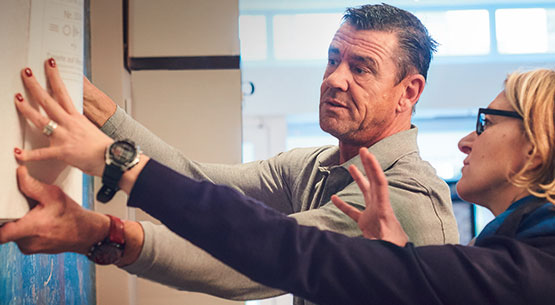 Before the team from Horst Block's painting contractor firm gets started, customers are given thorough advice. The good thing here? No two jobs are…