Tidiness is essential, spills are a no-no. Master painter Michael Bauer from Zwickau is happy to be called fussy – he sees this as a compliment. With his company, maler-creativ, he has built up a loyal and discerning customer base. His aim: To create something special!

Making things beautiful is his specialty. Master painter Michael Bauer spends a lot of time creating attractive and harmonious work for his customers. To mark the upcoming 15th anniversary of his company maler-creativ in Zwickau, he is giving himself something beautiful for a change: a new logo.

In the past, three brushstrokes in red, blue and yellow were the identifying marks of his company. Rather sloppy color gradients, a bit ragged at the sides. It was supposed to be colorful, lively and creative. "It suits our profession and my company", is what he thought for a long time.

Over the years, however, something else has become more and more important to Michael Bauer in his work: "We are dedicated to tidiness and straightforwardness", he says, "our customers associate this with us." And he wants to express this now with his new logo.

Soon it will be visible everywhere, from the letterhead to the company car: three meticulous, extremely precise bars in the three well-known company colors are now his trademark. The 42-year-old sees fussiness as a quality feature of his company.

He often hears: "You do everything so accurately and cleanly, we like that." Bauer is delighted with the positive customer feedback, and he makes sure that this impression lasts. This ranges from the smallest brushstrokes in any job – he does not tolerate inaccuracy or sloppiness – to tidiness on building sites. Chaos is not a word in Bauer's vocabulary. Every company car has to be tidy, the employees wear flower-white company clothes. Of course, they sometimes get flecks of paint on them, but there is always a change of clothes in the car.

Tidiness is essential. His team of currently eight employees knows this, too; many of them have been working for him for a long time. They nod, grinning, when the boss says, "My employees say I see things that other people don't notice. The tiniest corners and edges that are not 100 % perfect and need to be touched up."

Bauer even exceeds many customers' requirements with his own. "If there's a project where the building owner says, oh come on, leave it, it doesn't really matter, I can't accept that. A fellow painter could come along and wonder who did such sloppy work. No, I can't have that."

Creativity is part of being a painter. The same goes for accuracy. Michael Bauer learned this early on, because for him the profession is a family affair. The Bauers are a Zwickau painting dynasty. His great-grandfather and grandfather were master painters, and Michael Bauer's father continued the tradition.

In the 1980s he set up his own business in the GDR and continued to run it after the fall of the Berlin Wall, at what is still the company head office in the Zwickau district of Nordvorstadt today. The next generation followed suit: Michael Bauer and his younger brother also became master painters. That wasn't his plan in the beginning. After graduating from high school, Michael Bauer wanted to study architecture. But his grades were not good enough.

So he enrolled at a vocational academy for civil engineering. For his studies he needed a company to work in, but the very one he chose unexpectedly filed for bankruptcy. Bauer quickly had to rethink his plan, he canceled his studies and without further ado began an apprenticeship as a painter and varnisher in his father's company, "just to have something in his back pocket".

The painting trade ultimately became his dream job after all. He realized that he can build up something in this field that suits his talents and ideas. He started on his own, founding his own business in 2005, which grew steadily over the years. Bauer moved to his father's company head office when he retired. This is located on Rosa-Luxemburg-Strasse in Zwickau, including a warehouse and workshop.

Bauer lives upstairs with his wife Nicole, 41, and their son Max, 6. Nicole Bauer also plays an important role in the company, she organizes the office and comes into contact with customers very often: "the portfolio has become more and more demanding. Nowadays, we are known for mainly taking on high-end jobs." This means: "We don't just put up woodchip wallpaper and paint it white. We often take care of something really special."

The company maler-creativ offers every type of work that can be done with a paintbrush, paint roller and spatula, interior and exterior work, in addition to the design aspect with floor coverings, wallpapering and roof coatings. His employees even bring the scaffolding with them, and assemble it themselves. In the summer months, they often work on exterior facades of private homes. "The order situation is so good right now that we could actually work solidly up to Christmas. But we don't work outdoors when temperatures drop below five degrees, as we can no longer guarantee the quality of the paints and plasters." In winter, there are more interiors in the order books.

We are dedicated to tidiness and straightforwardness. Our customers associate this with us.

Michael Bauer spends about a quarter of his working time on building sites, sometimes to join in the work, sometimes to check how things are progressing. He is not a feared boss, but a gentle, calm character, trust in the team is important to him. "We're pretty relaxed with each other here, there are a lot of jokes, but it's also clear that we respect each other."

When you run a business, you need to have a sense for people, he thinks. "You're always a bit of a social education worker." He learned empathy early on, for example as a soccer coach. At the age of 18, he got his coaching license and then coached various FSV Zwickau teams, from children's to men's teams. "I have worked with very different people. You learn how to find ways to lead complex teams. That helped to shape who I am." 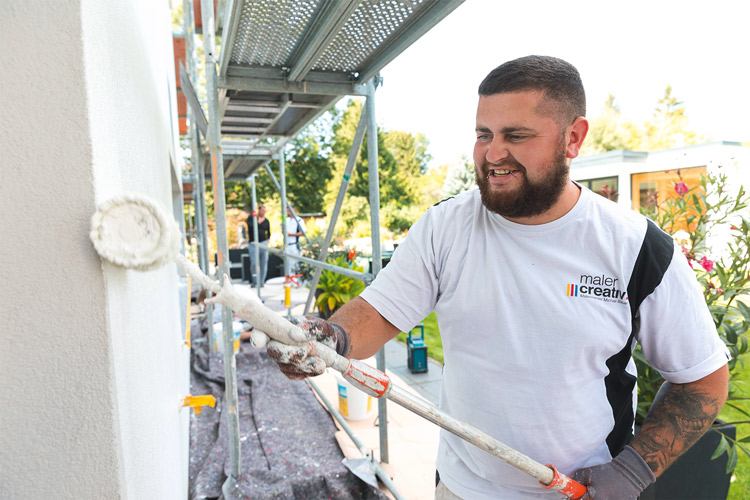 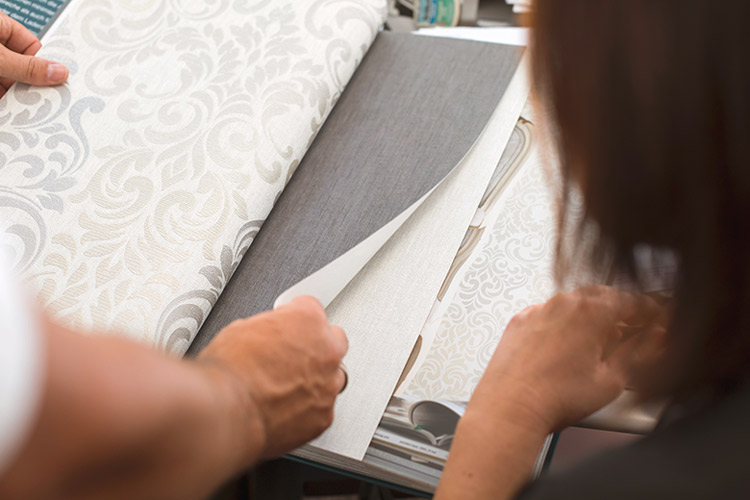 Bauer devotes a lot of time to advising customers, for example on wallpapers

To mark the 15th anniversary of the company there is a new, clear logo 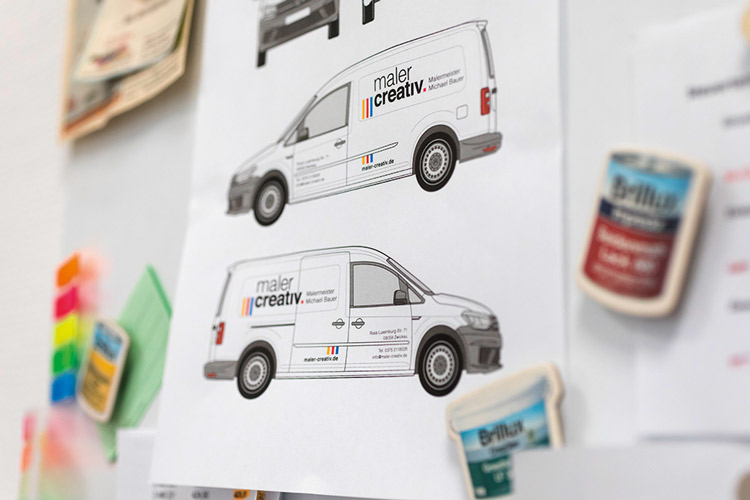 From the company car to the letterhead, the company is now presenting itself in a new design

Lots of time talking to customers

The boss devotes most of his time to talking to and advising customers. "Some customers don't really know what they want at the beginning, which is why good advice is so important." It's also about trends and fashions. Popular right now: muted tones, light, earthy colors – sometimes combined with lively accents such as a strong color or patterned wallpaper.

But it's not all about the flavor of the month. It is just as important to Bauer that the design ideas align with the customer and their furnishings. "It's always about working together to find a balance and the right product for everyone."

We are known for mainly taking on high-end jobs. We often look after something really special.

Nicole Bauer, office assistant and wife of the owner

One of Bauer's favorite building sites is an absolute architectural classic: the Johannisbad swimming pool in Zwickau. This is a venerable Art Nouveau swimming pool, built in the mid-19th century and beautifully preserved. Bauer's company is making sure that it stays that way. maler-creativ has been looking after the continuous maintenance of the swimming pool for years, and the hall has often been closed in the summer for this purpose.

Bauer's employee Andreas Pomper, 48, is usually on this building site. He now knows the swimming pool inside and out. Pomper had been working for Bauer Sr.'s company since 1994 before joining maler-creativ in 2005. "A family business with a very pleasant atmosphere", he says. "The jobs have become more and more upmarket, it's a quality challenge. I like that."

In Johannisbad, he and his colleagues can put the full range of their skills to work. Sometimes exterior facades have to be refreshed, sometimes walls have to be repainted, sometimes floor coverings have to be renewed – large-surface work. But again and again it is also about delicate work, the historical flower tendrils on the walls, for example, which have to be regularly redrawn with a particularly steady hand, the finest paintbrushes and the right stencils. All of this at warm swimming pool temperatures and with a view into the azure blue pool. "There are far worse places to work", says Pomper, with a wink.

Boss Michael Bauer is also proud of this regular job. As a resident of Zwickau, of course, because a job in such an exclusive environment honors the local patriot. But also as a master painter who has acquired trust in his work. Satisfied customers come back – that is part of his rules and teachings.

In 2005, Michael Bauer founded his company maler-creativ in Zwickau. The painting profession has a tradition in his family: the Bauers have been running painting contractor businesses for three generations. His company currently employs eight people. The focus is on orders for private customers, but some public institutions such as the historic Zwickau Johannisbad swimming pool are also part of the customer base. The company offers a wide range of services in both interior and exterior work, including painting and varnishing work, facade designs and flooring work.

Before the team from Horst Block's painting contractor firm get started, customers are given thorough advice. The good thing here? No one job is the…